Shannon Chamber today (Friday, 16 May 2014) called on the Government to review the rating system in Ireland and to replace it with a model that reflects current and future economic climates. This call was made at the Chamber’s spring lunch in Dromoland, Co Clare at which Mr Phil Hogan T.D., Minister for the Environment, Community and Local Government gave the keynote address. The newly appointed Ambassador of the People’s Republic of China, H.E. Mr Jianguo XU, was guest of honour.

In welcoming Minister Hogan to Clare, Shannon Chamber president Kevin Thompstone took the opportunity to outline some of the issues at local government level that impact on business, most especially commercial rates and refunds on commercial rates for vacant space. 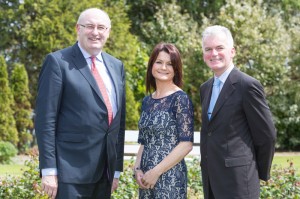 Minister Hogan thanked the Chamber for their continued engagement and noted that the Government has listened to and continues to value the view of industry in relation to the whole area of local government funding.

The Minister said: “This Government has introduced some fundamental changes to the ratings area which will result in significant modernisation of the system – we have removed the liability on subsequent occupiers of premises for outstanding rates on those properties, which will enable much more flexibility for businesses wishing to relocate and will help to drive up occupancy rates generally; we listened to industry in relation to the changes to the vacancy refunds regime and have now provided the discretion to locally elected representatives to decide on refund rates in their local electoral areas, which will enable them to provide incentives for industry; and we have allowed a 10 year period for harmonisation of rates levels across county and city council areas, which will result in rates decreases for some businesses, while minimising any annual increases for others who have enjoyed lower rates levels than their competitors in other parts of the local authority area in the past. These changes, together with the move to increased local funding of local authorities through local property tax will place the power for local income generation and expenditure where it belongs – with the people elected locally to make those decisions. Local authorities have responded very positively to the Government’s call to avoid rates increases in recent years – the most challenging fiscal period they have possibly ever experienced – and I am confident that they will carefully weigh their income generation powers in the future to ensure an appropriate balance is achieved between those benefiting from their services. Under the introduction of rates harmonisation, there will be no changes to rates levels from 2014 to 2015.”

Accepting that the Government has introduced local government reform, the first in 100 years, and that Councils have little scope to reduce rates in the current economic climate, Mr Thompstone stated: “It is essential that we move from a scenario where rates are seen as a disincentive to business to one where they are accepted as necessary, fair and equitable. This may require a new innovative model, but with input and dialogue between government and business, a solution to solving this burning and critical issue for business can be found.”

Suggesting that an incentive of zero or reduced rates be offered to early stage start-up businesses, Mr Thompstone said: “This would free up cash flow, help to grow businesses and ensure their survival. The knock-on benefits to government of increased income tax and reduced social welfare costs, would be more impactful than ‘tax breaks’, which are worthless to companies in the initial years, when they may be losing money.”

With regard to the harmonisation of the rates multiples across the country, Mr Thompstone said that while a timespan of up to ten years has been factored in to enable harmonisation, consideration has to be given to choosing a period of adjustment that ensures the viability and sustainability of businesses and local jobs.

“A ten-year wait for a town like Shannon, which currently has the fifth largest multiplier in the country, with an 18% and 12% differential in rates than its neighbours Kilrush and Ennis, is just too long, as the magnitude of the gap acts as a dis-incentive to open a retail enterprise in Shannon.”

Thanking Minister Hogan for listening to a proposal submitted by Shannon Chamber arguing against the standardisation of vacancy refunds to 50%, as proposed in the Local Government Bill 2013, Mr Thompstone stated that a refund upwards to 100% instead of down to 50%, as requested by the Chamber, was a better solution for business.

“A one size fits all is not as simple as it seems, as developers, retailers and industrialists have different perspectives,” Mr Thompstone said.

“Taxing space on a pay-as-you-use basis will release funds for investment and the payback to the economy from the increased activity will far outweigh taxes lost from retaining the status quo. While the final decision on the level of rebates rests with Local Authorities, we would ask that the 100% refund be maintained and not reduced in any capacity at Shannon as any reduction in the current rate will make Shannon uncompetitive,” Mr Thompstone added.

On the subject of the Local Property Tax (LPT), Mr Thompstone said: “While this tax has been introduced to create revenue for Local Authorities, and elected Councils have the discretion to reduce LPT by up to 15%, this should not be done to the detriment of business interests or job creation, through a corresponding increase in business rates.”

With regional re-configuration and regional assemblies currently under discussion at government level, Mr Thompstone presented the opinion that such structures should not cut across already established natural economic corridors.

“We are a tiny county competing on a global stage and must structure our regions in such a way that they enable us to compete internationally, not intra-nationally. Proposals to reform Regional Authorities and Regional Assemblies must match national economic policies,” he stressed.

Shannon Chamber presented its case to Minister Hogan on behalf of business owners, business managers and Chamber members, representing 250 member companies and their 7,500 employees, the providers of €12milion in cash every year to Clare County Council – one-third of the Council’s income from rates.