A company whose operations are spread over a 14-acre site in Shannon, that ships over 250,000 fire and carbon monoxide detection alarms per week to over 30 countries worldwide, and employs over 700 people in Shannon with an additional 100 in marketing and sales overseas, attributes much of its operational success to the introduction of Kaizen, a methodology focused on continuous improvement, in 1996.

Now the world leader in its niche product area, Ei Electronics opened its doors last week to host the fourth workshop in the Mid-West Lean Network’s 2019 series of workshops, to demonstrate how, when implemented with buy-in from employees at all levels, lean or continuous improvement can deliver multiple benefits to an organisation. In Ei Electronics case, lean has eliminated waste and led to single piece flow and standard operations.

“It’s all about questioning the status quo, standardising programmes and processes, and involving everyone within the organisation, from the production operator that does the job to all other functions, in problem solving to eliminate duplication and waste.

The workshop focused on standardised work, a powerful lean tool which enables the efficient operation of the final assembly processes at Ei Electronics.

As senior mechanical engineer Nicky Mullen explained: “At a basic level, standard work outlines the current best-known method (or standard) for each step of our production process. This new ‘standard’, forms a baseline for the process from which all future Kaizen or continuous improvement activities are measured. Once improvements are made, the new standard becomes the baseline for further improvements and so on, continuing an endless cycle of improvement.

“While standard work has focused mainly on the assembly process in the company, it has also been introduced in the moulding shop and in other areas of the company, such as finance. It helps everyone to work smarter,” added Mr Mullen.

Manufacturing projects manager Paul Kilbridge advised attendees seeking to introduce standard work into their companies to expect challenges along the way: “Implementing change may not be an initial success; people will be nervous at the outset but adopting the 30-day goal to embed change yields positive results. It’s important to have senior management and all employees involved in the process.”

Speaking at the event, Shannon Chamber’s CEO Helen Downes was fulsome in her praise for the great strides made by Ei Electronics, under the direction of its founder Mick Guinee, and the enormous contribution the company makes to the local, regional and national economy.

“Ei Electronics is an exemplar indigenous company that has proved it is possible to manufacture and scale up in Ireland once the right systems and management team are in place. As Mick Guinee stated: business is simple, it’s all about keeping your costs lower than your selling price.”

Shannon Chamber also used this occasion to announce that Enterprise Ireland is the new sponsor of the Mid-West Lean Network.

“ We are delighted to have the support of Enterprise Ireland in our endeavour to grow the Mid-West Lean Network and make it a best-in-class example of a lean network in action. Being industry led, the activities of the network are in direct response to members’ needs. The fact that 100 member companies are now part of the network and that each workshop is a sell-out means that it is meeting the needs of companies seeking to attain competitive advantage in their respective sectors. It augers well for the region and we look forward to taking the network to even higher levels with the support of Enterprise Ireland as sponsor and IDA Ireland as an active supporter.” 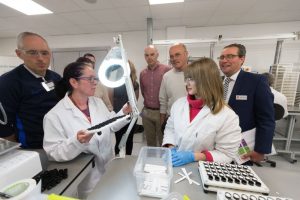