Small and medium-sized enterprises (SMEs) are a core element of our economy and it is vital that they have the skills to scale their businesses and realise their full potential. This was the key message delivered by Pat Breen T.D., Minister for Employment and Small Business when he launched the Up-Skilling the Mid-West last week.

The event, held in Limerick and organised by the nine Skillnet training networks operating throughout the region, showcased the many subsidised training options available to SMEs (and multinationals), through Skillnets.

Opening the event, Minister Breen said that maintaining a well-skilled workforce has been a key pillar of economic development and investment in Ireland for many years. Both the National Skills Strategy 2025, and Skillnets Statement of Strategy are focused on Ireland’s development (as an economy and society) through a significant emphasis on the need for up-skilling those in employment, and promoting the need for employers to participate in the development of their employees.

Skillnets CEO Paul Healy responding to the Minister added: “The key priority for Skillnets is to drive increased participation of employers in workforce development through our networks model.  Skillnets also plays an important role in regional skills development by facilitating dialogue between employers, and education and training providers at local level, to meet enterprise needs. The Up Skilling the Mid-West event is part of a broader awareness building campaign we are undertaking with employers nationally and we are very pleased that Minister Breen could join us.”

Shannon-based Atlantic Aviation Group’s CEO Connor Flanagan said while his company excels at finding and fixing problems, thanks to its experience and in-house technical expertise, it is poor at understanding the commercial impact of its technical delivery.

“Having looked at where training and up-skilling would have the greatest impact within the company, not just at management level but also for crew-leads and project-leads, we found that Shannon Chamber Skillnet gave us access to the training we

Killaloe-based Sheamus O’Donovan from O’Donovan Insurances, a member of the Derg Business Alliance, acknowledged the value of the structure specific training that Skillnets offers to SMEs.

“The short modular courses that we as a company and a member of a business network can avail of are invaluable. We effectively have access to a HR training resource that we could not otherwise afford ourselves. The training providers are sourced for us, the prices are negotiated and the locations and facilities arranged. uLearning Skillnet is our first port of call for all our training,” he said.

Samples of the types of training offered by Skillnets on topics are diverse as corporate well-being, organisational transformation and the ‘7 Habits of Highly Effective People’ were given by guest presenters Malin Kelly, Modig Corporate Services, Dr Ardawan Lalui, Lalui Leadership and Peter Nolan, Franklin Covey. 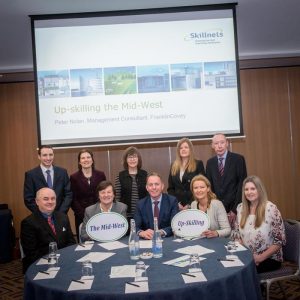