The visit, which was co-ordinated by Shannon Chamber and hosted at Ei Electronics’ new Centre of Excellence, was specifically requested by UNIDO to witness the progress that has been made in Shannon since UNIDO organised a training programme on Free Industrial Zones for a Chinese delegation in Shannon almost 40 years ago. That group included Mr. Jiang Zemin, at the time a senior Vice Minister in charge of State import and export administration, who would later rise to the office of President. The lessons that this group brought back to China were invaluable and contributed greatly to the economic boom that followed.

Speaking in Shannon, Mr LI Yong said: “Shannon Free Zone holds a special significance in the history of industrial development. It is a place that not only changed the development path of the Shannon region, but many other regions around the world. It is truly inspirational that this small 2.5 square kilometre site on the edge of Europe has had such a huge influence around the globe.

“UNIDO’s work over the past four decades can be traced in a direct line from Shannon to our current flagship programme, which is called the Programme for Country Partnership (PCP) and is our innovative model for accelerating inclusive and sustainable industrial development in Member States. This programme, along with the national development agenda and focused on sectors with high growth potential, supports countries in achieving their industrial development goals,” he said.

During his address to the Shannon business community, Mr LI Yong paid a personal thanks to the two former Shannon Development employees – Mr Brian Callanan and Mr Tom Carroll – who were instrumental in organising the training programme forty years ago saying it was the catalyst for the current economic progress now being witnessed in China. He also singled out another former Shannon Development employee, Mr Tom Kelleher, who was unable to be in Shannon, for his work on compiling UNIDO’s Export Processing Zone (EPZ) manual for the setting up of such zones and for his advice on numerous projects over many decades. He referred to his visit as a very special day, one that allowed him to see with his own eyes the Shannon Free Zone and meet the people to have made history and made Shannon the special place it is; a place which generates innovation.

“That’s why so many leaders in China have paid their respects to this place,” he said.

In his presentation to the Director General, Shannon Chamber director and former CEO of Shannon Development, Kevin Thompstone, presented an overview of developments in Shannon over the past forty years, illustrating the extent of activities and the sectoral spread now operating from Shannon. A tour of the Free Zone served to illustrate the continuous investment being rolled out by Shannon Commercial Properties with the most recent facilities constructed for Jaguar Land Rover a fitting example of the standard of building being delivered to accommodate new investment to Shannon.

A number of Shannon Free Zone companies – Ei Electronics, Bolgers and Tekelek presented their stories to the Director General. They demonstrated how, through building capacity and acquiring the ability to build and sustain market share, they are now leading players in their sectors in international markets.

Ei Electronics has attained leadership in the fire and carbon monoxide alarm niche through leading the way in every technology breakthrough in the sector. Tekelek is the largest tank-level management hardware company in Europe whilst Bolgers has grown from a sub-supplier to Shannon companies in its founding years to now exporting 54% of its products.

The Director General was not only impressed by the level of development activity currently being undertaken by Shannon Commercial Properties, facilitated through a 1million square feet capital plan for Shannon Free Zone, in a mix of new and refurbished property solutions but by the ambitious plans to make Shannon a centre of excellence for connected and autonomous vehicles (CAVs).

Shannon Chamber CEO Helen Downes in summing up the relevance of a visit of this calibre to Shannon said: “The fact that Mr LI Yong made a specific request to include Shannon in his 3-day visit to Ireland speaks volumes for the status the Shannon Free Zone holds in the minds of global policy makers.” 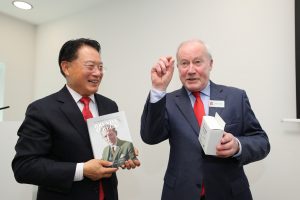 In presenting the Director General of UNIDO, Mr. LI Yong, with a biography on the late Dr. Brendan O’Regan and a smoke alarm, Ei Electronics chairman and CEO Michael Guinee spoke about his company’s goal to capture an initial one per cent of the Chinese market. Photo: Eamon Ward. 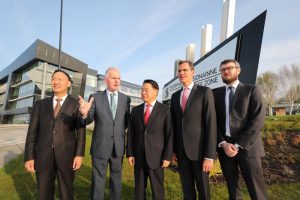