The Shannon facility was chartered to carry out all customisation and localisation, such as labelling and packaging to the customers’ specifications, and at that time to ship to approximately 400 boutiques, department stores, mail-order houses and distributors in the EMEA region (Europe, Mid-East and Africa).

Between July 1997 and August 1999 the parent company went through a difficult financial period, Chapter 11, during which the ownership changed and new management was put in place.

By April 2001, approximately 27 people were employed in Shannon plus another 10 salespersons and agents throughout Europe.

In 2005, there was a change in ownership of the Corporation and sights were set on achieving listing on the New York Stock Exchange, which was successfully achieved in 2007.

The Maidenform Corporation grew global sales to approximately $570 Million with 650 direct employees, by the time it was purchased by Hanesbrands Inc., with the transaction completed in October 2013.

As of October 2016, the company employs 45 permanent staff at its European Operations Centre in Shannon with another 40 employees involved in sales and operations throughout Europe.

With the acquisition of DB Apparel Europe in 2014, Hanesbrands Inc. is now the biggest manufacturer of men’s and women’s intimate apparel in the world.

Maidenform (Ire) is currently transitioning to become part of the Hanesbrands European Division, “Hanes Europe Innerwear” with a very positive outlook for the future.

“This is a great news story for Shannon and we look forward to seeing Maidenform (Ire) strengthening its presence in Shannon.” said Shannon Chamber CEO Helen Downes. 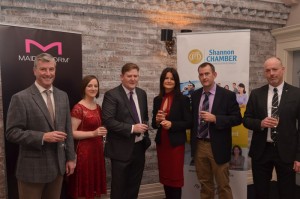