Little Benefit for Workers, Holidaymakers or hoteliers in Budget 2019

Budget 2019 has been described as a budget that did not give a lot to any one group with much of what was anticipated prior to its publication coming to fruition. This was the general tone from attendees at Shannon Chamber’s post-Budget briefing, held in association with Grant Thornton, where Professor Eoin Reeves, Head of the Department of Economics at the University of Limerick (UL) was guest speaker.

Stating that the budget was delivered at a time of rather positive economic conditions with the Minister having €1.5bn to spend, Prof. Reeves was swift to voice his concerns about the risks the economy is facing and how economic policy should be framed to face the challenges that lie ahead.

“Ireland’s recovery is real. The public deficit is under control; the labour market has rebounded but this is against a background where public debt, at 111% GNI* and 69% of GDP, is high and, private sector debt still ranks high in a European context. While interest rates may be favourable now, this won’t last forever and this presents a real risk,” Prof. Reeves stated.

Turning to external risks and challenges, he mentioned Brexit and the negative impact a 1% drop in the UK’s GDP would have on Ireland’s GDP; geo political pressures linked to rising oil prices; the potential pressures that Ireland may face to change its corporation tax rate and, the need to expend on infrastructure, housing and public services.

While there are grounds for optimism, with Ireland having one of the largest percentages of people aged between 25 and 34 and the highest percentage working In IT, making the country well positioned from a people and productivity perspective, Prof. Reeves pointed out that, despite this, we do not fare well when compared to other high income countries.

“Ireland is second lowest in terms of public spending with a significant spending gap of €13bn and, while some of this will be addressed by the NDP, the gap with remain.

“Ireland also ranks low on spending in education and on research and development, which could, over time, undermine the key advantages we have as an economy. That’s why we need to have a conversation about revenue sufficiency; we need to think how we can raise tax revenue rather than relying on transitory sources such as corporation tax or, as was the case during the property boom, tax on property transactions.

“If Ireland is to be well positioned for the challenges ahead, we need a sustainable tax base; recurring expenditure cannot be financed from windfall gains,” Prof. Reeves cautioned.

Giving an overview of the budget, Grant Thornton’s tax director Theresa O’Gorman said: “Budget 2019 included a number of welcome initiatives, however, its failure to make significant inroads in addressing the tax disparity between private landlords, and the operators of Airbnb facilities, is disappointing. Allowing the gap to continue does nothing to increase the level of private residential accommodation available.”

Commenting on the Budget overall, Shannon Chamber director Ian Barrett, who was a contributor on behalf of the Mid-West Chambers to Chambers Ireland pre-Budget submission said: “This is not a budget for workers, holidaymakers or hoteliers. The spending power of the Irish worker is being severely constrained, and this has negative ongoing repercussions for the Irish retail sector.

“The modest income tax giveaways, lower than the rate of inflation, reduce workers’ spending power and are fully taken away through other tax increases including increased excise duty, increased cost of diesel vehicles and higher taxes on holidaying in Ireland, eating out and on hairdressing. The net tax effect is that the Government is actually increasing taxes by over €300 million Euros.

Calling on business representative organisations to represent their workers and push back on an extremely progressive and high tax system, where private sector workers have little voice, Mr Barrett stated: “Workers’ lack of spending power will have a detrimental effect on Ireland’s competitiveness as employers will come under pressure for increased wages,” Mr Barrett concluded. 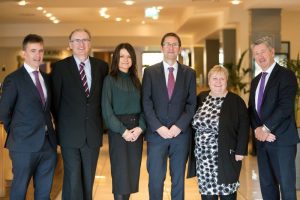