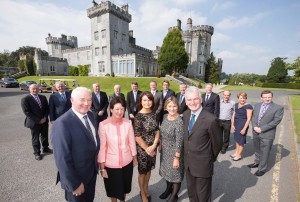 “The Celtic Tiger economy ground to a halt because of its dependence on credit-financed domestic consumption and residential property development but it is now clearly understood that the key to sustainable economic growth is the development of enterprise, exports and innovation,” said Shannon Chamber president Kevin Thompstone addressing an audience of business executives in Dromoland Castle Hotel, Co Clare today (Thursday, 11 September 2014), where Enterprise Ireland’s CEO Julie Sinnamon gave the keynote address.

The lunch, which was sponsored by Grant Thornton and supported by Dromoland Castle Hotel, was the first luncheon event in the Chamber’s autumn schedule. The audience, comprising Chamber members and the wider business community, was representative of the growing indigenous and multinational sectors in Shannon and the wider region.

‘At Enterprise Ireland, our plan is to build on this base. Job creation remains the key priority for Enterprise Ireland and exports will be the key engine for growth. We believe that the potential exists for Irish enterprise to make an unprecedented contribution to economic prosperity in Ireland, through export growth and job creation.”

In his opening remarks, Mr Thompstone referred to the Government’s Action Plan for Jobs 2014 as the road map for where government policy wants us to go, but he said it was critically important to keep focused on the course we take to reach that ultimate destination.

“Thanks to Enterprise Ireland, entrepreneurs, management and staff in Irish business, Enterprise Ireland-supported companies make a significant contribution to the national economy – an 8% increase in exports in 2013 to over €17 billion; 5,400 net jobs created; 140 companies undertaking R&D projects in excess of €1 million and close to 900 on projects under half a million Euro; and 104 new high-potential start-ups generating new activity in 2013.”

Yet, with the Mid-West region providing only 7% of total national indigenous employment, nowhere comparable to the Dublin Mid-East level of 44% or the South’s 26%, Mr Thompstone said it was critically important that there is a focus and action on redressing this imbalance. 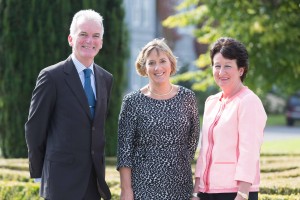 “That’s why the four Chambers of Shannon, Limerick, Ennis and Galway have come together to form the Atlantic Chambers Alliance. We want to and can contribute much more to the goal of Ireland becoming a sustainable economy built on enterprise, exports and innovation,” he said.

Referring to a data gap which needs to be resolved, Mr Thompstone suggested that, while employment data is available at a regional level, readily and consistently available regional data on business exports, R&D, start-ups and spend in the local economy would give a better indication of whether regions are winning or losing on an annual basis.

“What gets measured gets done and good regional data on these key indicators of economic activity will highlight areas which may require more or less effort.   Without this we run the risk of settling into a comfort zone where national level statistics mask significant regional imbalance and lose the opportunity to ensure that all areas contribute to national recovery,” said Mr Thompstone

“Having more in-depth data would be a better base from which to work,” he added.

Commenting on the strong indigenous base that exists at Shannon, Mr Thompstone cited companies such as Modular Automation, Bolgers and EirTech Aviation as perfect examples of what can be achieved from a West of Ireland location.

“Modular Automation started out as a sub-supplier to the local multinationals before being bought by its largest customer, Molex, and then subsequently returning to Irish ownership through an MBO. The company invests heavily in R&D, with support from Enterprise Ireland, and is regarded as ‘best in class’ for its design and manufacture expertise, experience in project management and low-cost tooling.

“Bolgers, one of the earlier Irish-owned engineering start-ups in Shannon, continues to prosper under second generation management and is now very focused on export and innovation undertakings with customers such as Caterpillar.

“A recent winner in the inaugural Irish Aviation Industry Awards for its Cabin Pressurization Warning System for the Being 737 fleet, which was deemed the most pioneering innovation in its category, EirTech Aviation is working on a number of additional R&D initiatives for the aviation sector, again with Enterprise Ireland support.

“These companies illustrate what can be achieved from Shannon. Increasing linkages and collaboration between industry, third-level Colleges, multinational companies, IDA and Enterprise Ireland will lead to a lot of robust activity of this nature in the years ahead.

“However, practical ownership structures don’t feature in Shannon Chamber’s vocabulary. Whether a company is a multinational or Irish-owned does not matter to us; what matters is that the industry base at Shannon continues to strengthen and grow and if we, and the Atlantic Chambers Alliance, can be a conduit to making that happen, we are happy to do so,” concluded Mr Thompstone.