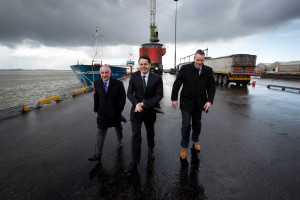 Launched by Minister for Transport and Tourism Paschal Donohoe, the programme is the implementation of the first key element of the port company’s masterplan, Vision 2041, which is aimed at transforming the Shannon Estuary into a major national and international economic hub.

Today’s announcement will see SFPC commence a seven year programme in quayside infrastructure development with a €12.5million investment in infilling of 3.45 acres on the port’s East Jetty, with work beginning this month.

Preliminary works for Phase II – connecting the East and West jetties – have already commenced, with the third phase, the reclamation of a further 2 hectares, to commence on the completion of phase II.  All three phases will add over 35,000m2 and additional berthage when completed.

The new open quay storage area on the east-jetty will enable the company berth 40,000 ton vessels directly alongside the quay, leading to faster turnaround times for customers and, in turn, creating significant opportunities for growing cargo handling on the jetty in line with those projected in Vision 2041.

The masterplan is focussed on unlocking the enormous potential of the Shannon Estuary arising from its unrivalled depths and resultant unique advantage of being the only natural watercourse in Ireland capable of handling the world’s largest vessels. It envisages the creation of up to 3,000 jobs over the next 25 years on the estuary by capitalizing on these natural water depths.

SFPC already currently helps to facilitate international trade valued at over €6bn per annum through its six port facilities on the estuary.

The infill programme first phase will require 65,000m3 of infill and will be completed in 12 months.  The contract for the East Jetty expansion has been awarded to Kilrush, Co. Clare based civil LMN Keating.

Funding for the €50m capital investment programme is already in place, the majority from SFPC’s own reserves with some external finance.

Together with the planned private sector investment at the Foynes Port complex – €26m alone this year –the overall investment already confirmed for Foynes over the period of this investment program is a minimum of €75m. The private investment includes the 142 job CPL investment in a biomass plant at Foynes and the 40,000sq ft storage facility being developed by Argosea.

Speaking at the launch, Minister Donohoe said,  “These announcements are the first phase of a significant investment programme which seeks to double SFPC trade in the next three decades in line with its ambitious masterplan, Vision 2041.  The port is seeking to maximise the enormous potential of the Shannon Estuary and anticipates that the number of people employed in port activities will increase by 25% over the period of Vision 2041, with the economic benefits extending towards a much larger economic system.

“The long-term job creation figures, of up to 2,000 jobs, are based on anticipated expansion in existing heavy industries as well as planned projects such as the Shannon LNG terminal. I am delighted to see investment of this scale, knowing the impact it will have on the Mid-West region generally.”

Announcing the investment, SFPC Chief Executive Officer Pat Keating said that it will create real potential for further growth at the company and keep its aggressive plans on target. “The investment we are announcing is necessitated by significant growth at Foynes, our largest port, with tonnages almost back to the peak of 2006.  We are reaching capacity at the East Jetty and this investment will facilitate significant additional growth at the port.

“The very fact that this is the first major infrastructure in any seaport in Ireland since the 1990’s speaks volumes about the growth trends and confidence in the business.  Today’s announcement of the commencement of Phase 1 of our investment in the bulk handling facilities at Foynes port shows that we are delivering on not alone the projected levels of growth but also on the infrastructure investment programme outlined in Vision 2041.”

SFPC Chairman Michael Collins said that the phased programme will transform the open quay storage capacity of the port.  “This investment will remove a significant traffic bottleneck on the port, deliver faster vessel turnaround times and give us the capacity now to grow our business further.

“The potential of the estuary and our port facilities, is enormous.  Thanks to a range of unique advantages, not least the unrivalled depths the Shannon Estuary and its ability to handle vessels larger than any other water course in Ireland, this is a strategic facility that has the potential to unlock huge growth opportunities for not just this region but Ireland.

“This investment in our jetty infill programme will play a central role in that.  It is the first major project under our masterplan, which is all about delivering on SFPC’s potential for attracting major inward investment.  It is key to maintaining the strong growth momentum gathered here and keeping us on track for doubling our tonnages within the timeframe of our masterplan.”