Bookings are closed for this event.

The Irish Aviation Authority is a major employer in Shannon, with 400 people employed in its Ballycasey Centre and a further 70 in Ballygirreen, Newmarket-on-Fergus.  Eighty-five per cent (85%) of its €180m turnover is derived from its Shannon operations.

With responsibility for the management of Irish controlled airspace, the safety regulation of Irish civil aviation and the oversight of civil aviation security in Ireland, it is inevitable that the Authority is keenly attuned to Brexit’s impact on aviation, at a European and Irish level in areas as diverse as traffic rights, nationality of airlines, consumer protection, the environment, safety regulations and ownership and control limitations.

At this breakfast briefing, IAA CEO, Eamon Brennan will share his views on how Ireland, as an EU member state, could be impacted by such changes. 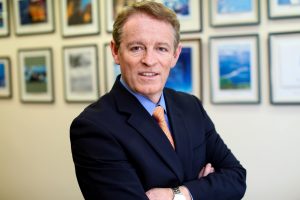 Eamonn Brennan is Chief Executive of the Irish Aviation Authority (IAA) with responsibility for the provision of Air Traffic Management (ATM) in Irish controlled airspace (covering some 451,000 square km), aeronautical communications on the North Atlantic, and Air Traffic Control at the major Irish Airports, as well as the safety and security regulation of the Irish civil aviation industry. Mr. Brennan was the Commercial Director of the Authority prior to his appointment as Chief Executive in 2003.
As well as being a member of the Board of the IAA, Mr. Brennan is also a member of the Board of Aireon, a joint venture between the IAA, Iridium Communications Inc., Nav Canada, ENAV (Italy), and Naviair (Denmark), which was established to launch the world’s first satellite-based air traffic surveillance system from 2018. He is also a member of the Board of Entry Point North, an international provider of Air Traffic Controller training services, in partnership with Naviair, LFV (Sweden) and Avinor (Norway). He is currently the Vice-Chairman of the COOPANS Alliance Board (comprising of the ANSPs of Austria, Croatia, Denmark, Ireland and Sweden).

The Irish Aviation Authority (IAA) is a commercial semi-state company employing approximately 650 people at six locations around Ireland. The IAA has three main functions: the safety regulation of the civil aviation industry in Ireland; the oversight of civil aviation security in Ireland; and the provision of air traffic management and related services in Irish controlled airspace.

The IAA receives no State funding. Its revenues are generated through charges and fees raised from its airline customers and regulatory clients in respect of its operational and regulatory activities, which are amongst the lowest user charges in Europe.

Registration from 7.30 am, light breakfast will be provided.

Events Cancellation Policy: Cancellations will be accepted up to 72hrs before each event. Events which are cancelled within 72 hours of scheduled date shall incur a cancellation fee equal to 50% of the agreed cost. Registrants who fail to attend the event will be charged 100% of the full fee. This policy applies to all events. Please quote Purchase Order number if required on invoice.